A machine allows us to see the interior of the human body. 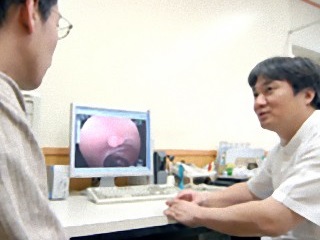 It is a machine that allows us to see the interior of the human body. Originally it was a hard rod with a camera attached at one end and was known as the 'stomach camera.' Later, thanks to technological developments, the camera now uses CCD technology and the rod is equipped with electronics. Thus, this transformation leaves us with a machine called an endoscope. Because of the development of miniature CCD technology, this tiny, high-resolution camera allows us to observe various areas within the body such as the esophagus, stomach, small intestine, colon, alimentary canal, blood vessels, bile ducts, cerebral ventricle, and joints. At our clinic we use an endoscope to view the esophagus, stomach, colon. We use the latest digital electronic endoscope at our clinic.

There have been enormous changes in diagnosing and treating alimentary canal cancer over the last ten years. When talking about “early stage cancer”, previously barium was used to detect if a patient had stomach cancer. Before the development of the endoscope this was the only way to diagnosis a patient. In theory when using barium “early esophageal cancer” and “early colorectal cancer” would be fine examples, however in reality early stages of cancer are nearly impossible to see. However the high resolution and efficient endoscope has allowed us to detect early stage cancer more accurately in the esophagus, colon, and stomach. Also the need for surgery in early stage cancer has greatly decreased because we can use the endoscope to remove the cancerous area, this tiny machine has changed treatment of early stage cancer on a grand scale.
Almost all cases of early stage cancer are detected before any symptoms are present. It is highly recommended you should have your stomach examined at least once a year. At our hospital we use sedatives, which allow our patients to undergo the procedure painlessly. Also during the examination we use a variety of monitors which allow us to view every angle of the patients body, thus we can carry out a safe examination.

Which is better, the endoscope or barium?

Patients often ask this question. Due to the development of the endoscope and the increased positive use of this machine in hospitals, the number of cases who favor the endoscope have rapidly increased. On the other hand, the use of barium and the X-ray have not advanced over the last ten years, proportionally the endoscope is pulling larger numbers nation-wide. Nowadays, if a patient undergoes an endoscopic examination and something is discovered, many hospitals will follow-up with a more precise examination and an X-ray examination. 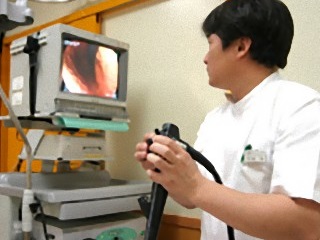 However the endoscope does have its faults. There is always the possibility the doctor in charge may overlook a cancerous area. Of course, the number of years of experience and the institution should all be taken into consideration when determining the skill of any physician.
There is a numerical value that is given to blood tests of digestive diseases; physician's can rely on this number to help when performing the endoscopic operation, however as you know, no one is perfect.

To people who suffer from diarrhea

(Wouldn't you be interested in our hypersensitivity enteritis diagnosis?)
There is a disease called "collagenous colitis". I imagine if you are not a digestive organs specialist you may never have heard of this disease. At this moment, there is still not even a suitable Japanese name for this disease. In 2001 in the Japan Medical Conference Journal on Digestion I entitled the disease in Japanese,“Kougensen-i sei daichoen". Near the bottom of the mucous membrane of the colon there is a thick (about 0.01mm) collagen band, which is susceptible to hyperplasia (increased growth of cells). If this happens, the colon is unable to absorb water and thus an aqueous solution (diarrhea) is the end product of digestion. The cause of this disease is unknown however; we think may be a side effect from a drug that alters the immune system. According to clinical observation, middle-aged women and older (sex ratio: female 9, male 1) are most likely to have this chronic disorder.

Endoscopic findings of this disease are considered as normal. Here is an outline of this disease's first diagnosis under the microscope, starting off with a tissue collection from the mucous membrane. A pathologist named Dr. Lindstrom first discovered this disease in Sweden in 1976. After the discovery of this disease there were hundreds of cases reported in America and Europe, nowadays this disease is not rare. While I worked in Sweden at Lund University Malmo Hospital, Dr. Lindstrom was a professor in the pathology department. During the time I was at Malmo Hospital he had already retired, however I was often called on to do endoscopic examinations on patients who suffered from this disease. In America and Europe, the use of an endoscope is very common; in Japan I have come to realize we are not as thorough in our methods when making observations with an endoscope. Because of my extensive use of the endoscope I may have left out a detail or note, thus if you are interested in learning more about this topic, I am more than happy to recommend some follow up reading.

In recent years, the concept of this disease has become more recognized in our country little by little. In 2009, a special issue was released in a magazine, Stomach and intestine, for specialists. However, a common awareness amongst physicians in general has yet to be achieved. There may be doctors who diagnosis this condition as 'irritable colon syndrome' or 'hypersensitive colon' and label stress as the cause, however I hope you will consider my work next time your patient undergoes a endoscopic examination of the colon.

Hospitals we work in cooperation with: